Oklahoma-based artist Jaiye Farrell cultivated his style of painting from a desire to abstract patterns that transcend societal and cultural divides and remember the communal roots of humanity. From an infatuation with archeology emerged a creative and ambitious talent: to craft signature designs that inspire inner self-reflection. By researching his own ethnicities and exploring their backgrounds, Jaiye has discovered the commonalities each person shares as an embodiment of life and light. Through his artwork, he preserves the distinctive expression of the indigenous whose artwork contributes to the importance of heritage. Since many have a lost sense of where they come from and many tribes have lost their native languages, Jaiye works to create art that strikes people with a sense of belonging.

Artist Statement: “Art is a language that doesn’t have to be read but can be felt.” I think self-expression is cleansing, and vital to living a happy life. By serving as a release of deadened thought and worrisome emotions, it makes room for new things in life. Through individual exploration and discovery, one can join communities of like-minded souls and empower the purpose that represents us most.” 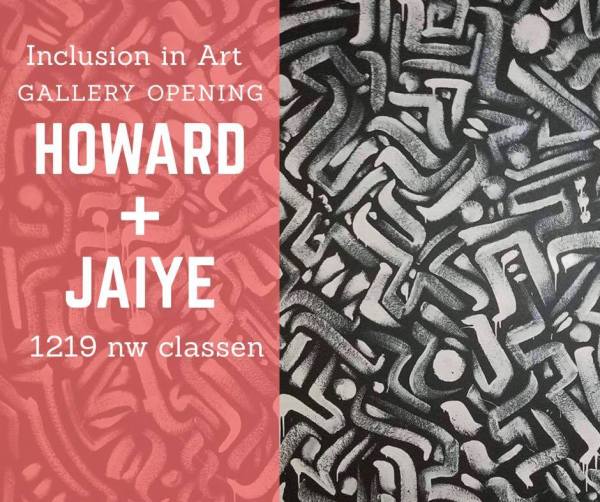 Mentor Howard Koerth is a nationally recognized ceramic artist currently residing in Oklahoma City, OK. He received his BFA from the University of Kansas (1983) and MFA from Indiana University/Bloomington (1988). For the past 25 years, his work has been included in invitational and juried exhibitions throughout the United States. In 1993 Mr. Koerth received a Regional Fellowship Award in Crafts through the Mid-America Arts Alliance/National Endowment for the Arts.

In 2003 Mr. Koerth served as Artist in Residence at the Tainan National College of the Arts in Taiwan, an experience that influenced his current visual exploration. Howard is a faculty member at Rose State College in Midwest City, OK.

Artist Statement: “I am an object maker. An “object” has an origin, a source, a beginning. By choice, alteration and/or re-presentation the object exists beyond its literal definition, becoming something else. It serves as a visual connection, individually interpreted and simultaneously referencing and transcending beyond its common origins. In its re-invention it becomes unique, an individual expression.My major influence has been non-western ritual objects, their blending of mystery and common connections, which has always been the basis of good

My major influence has been non-western ritual objects, their blending of mystery and common connections, which has always been the basis of good storytelling.”