My frustration and exhaustion with history classes that reduce the role of black people to slaves and objects has led me to imagine a time where there was no such thing as slavery but rather of black people that occupied a higher status. I illustrate this through my own personal life experiences in an extravagant way. I am the model for my main character, and although her story parallels my own, the main character retains her own story. I would like my series to push the viewer to question “is this a part of a history that actually existed, but has been forgotten?”

I find it makes more of a statement when seeing my black characters in paintings of a royal status then what is usually depicted, rather than black faces blending into the background as property. I also find that creating these pieces with oil paint captures the tradition of history painting and acknowledges that oil paintings were a sign of wealth. I also incorporate mixed media to depict the quiet private moments of my characters. My five charcoal and pastel pieces called “Searching for an Answer” are an example of those quiet moments. These drawings show the main character trying to grasp and figure how to handle a terrible situation.

I choose to imagine my characters in the Baroque time period instead of the present because, to me, the Baroque period was truly decadent and it’s a style that I have always admired. My family history is unknown to me, so I looked to what all my classes and social media have taught me over the years. For the longest time I even thought Egypt was in Europe because the media always portrayed the characters as white then of color. So I create my own history with me and my family in a view I have never seen black people portrayed.

This series is a narrative about a wealthy powerful queen whose health is making it hard for her to continue her reign, so she looks to her two granddaughters knowing that they are capable to be on their own when she passes on. She allows her youngest to continue to study paths as a priestess and future queen, but starts to prepare the oldest daughter to rule the kingdom. When the oldest daughter is told of the reason of her increased pressure the story then changes on the growth of how she prepares herself on taking on this enormous responsibility. 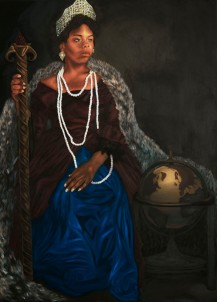